Who are the criminals ? Discharge for the defendants !

June 1st, 2d and 3rd in Bar-le-Duc, against Cigéo, against nuclear power and against the criminalization of our struggles!

After 4 years of investigation for « criminal conspiracy », thousands of hours of phone taps by the gendarmerie, a 15,000 pages file, cubic meters of seized material, an omnipresent police harassment, denounced by the League for Human Rights, the time has come for the judicial farce. On June 1, 2 and 3 at the Court of Bar-le-Duc will take place the trial of the seven « criminals » of the struggle of Bure. Friends fighting against the Cigeo atomic mega-dustbin project have been deprived of their freedom to move and prevented from speaking to each other for many years. This procedure was already a punishment and an attempt to paralyze a whole resistance movement. What is muzzled in these people is their anti-nuclear commitment, their convictions and their freedom of expression. 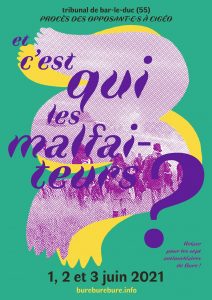 We are all criminals!

There is still no nuclear waste in Bure. However, we are at a turning point because Cigeo could soon be recognized as a project of public interest : expropriations, clearing of the wood of Lejuc and the first workplaces could emerge by 2022. We will not let this happen. This « trial of criminals » will be first and foremost the trial of CIGEO and of the nuclear industry.

It is time to denounce the  » criminal conspiracy » as a tool for criminalizing our struggles. This legal tool, resulting from so-called « villainous » laws and anti-terrorism, is used to attempt to paralyze all forms of self-organization, everywhere in France and elsewhere: against the « yellow vests », people from working-class neighborhoods, anti-fascists, environmentalists …

Their paper-based justice does not scare us: on June 1, 2 and 3, let’s meet in Bar-le-Duc, in front of the court. Let’s be numerous to affirm our opposition to nuclear power, to support our friends, to celebrate all our struggles and to denounce this trial.

Meet on June 1 from 9 a.m. at Bar-le-Duc on Place Saint-Pierre

Every day during the trial: rally in front of the court

Spread the news, please, the deadline is very short to mobilize: talk about it around you!

* Possibility of accommodation in and around Bure

* More info and program to come on bureburebure.info

* In the context of the COVID-19 pandemic, we invite everyone to take the appropriate measures, gel and masks will be available in sufficient quantities

It is for an alleged « criminal association » and illegal protest that seven activists of the struggle against the French nuclear state (1) will present themselves in front of the court of Bar-le-Duc (2) in Meuse on 1, 2 and 3 June 2021.

They are alleged to have organised the so-called criminal resistance against the nuclear burial project that ANDRA (National Agency for Radioactive Waste Management) is planning to build in the municipalities of Bure and Saudron in eastern France. They are accused of having participated in the organisation of actions against the Bure atomic « laboratory », of having illegally demonstrated, of being in possession of « explosives » and/or of having made available infrastructures used for rebel actions against ANDRA in the years 2015 to 2018 (3).

However, it is not a democratic process that accompanies the idea of this irradiating and irreversible nuclear waste dump. Among other things, more than 50,000 signatures requesting a referendum on the so called laboratory have been ignored by the political power (4).

It is at a depth of 500 meters underground that EDF wants to unload nearly 90.000 m³ of the most critical waste produced by an industry that is supposedly ecological, economically out of breath and, as show Windscale, Mayak, Harrisburg, Chernobyl and Fukushima – to mention only the most devastating accidents – dangerous for humans and the environment.

The resistance against CIGEO (Centre Industriel de Stockage Géologique), which gained new momentum with numerous demonstrations, actions and occupations in the mid-2010s, was quickly countered by unprecedented surveillance: numerous searches, dozens of territorial bans, incarcerations and unconcievable police violence in the Meuse countryside followed (5). Since the battle intensified in the 1990s (6), the implementation of the technological and repressive action against the opinion of the population has involved phenomenal subsidy payments, bribes to elected officials, unscrupulous repression and the militarisation of an entire territory on which the French nuclear state is active with all sorts of adjacent projects, ranging from the EdF archives in Houdelaincourt to the model of the 1:1 funicular made by POMA in Froncles, the base of St Dizier, on to the nuclear laundries that failed to be installed in Joinville thanks to popular mobilisation (7).

The indictment of a so-called « gang of criminals » in June 2018 targets people committed against further environmental destruction, at a time when a change of course is more than necessary. In order to put an end to the mirages of extractivism and to this energy-intensive mode of industrial organisation of energy on a colonial basis, with projects that are impossible to build and to secure, it is necessary to intensify the environmentalist struggle and to put an end to the excessive criminalisation of an entire movement (8).

The seven people that are going to the Court of Bar-le-Duc are charged instead of all of us. We unreservedly stand in solidarity with all those who oppose CIGEO and the nuclear world today (9). We strongly condemn the injustice done to all our comrades involved in the struggle against this deadly project. We demand the unconditional release of our friends and adequate compensation for the moral damage and the deprivation of freedom of movement and expression they have suffered over the past three years.

CIGEO will not be built in Bure or elsewhere!

Relaxation and freedom for the defendants of the trial of 1, 2 and 3 June!